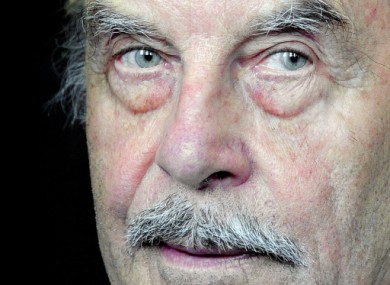 Dear fellow men, and more so women, and friends in the blooming scenery between Vienna, Strasshof, Amstetten and Frohnleiten, but also the dreary swamps between Dover and Land´s End and the desolate rest of the galaxy. My special greetings go to the hometown of Mr. Prikopil and Fritzl, Cheerioh Captain Kirk on the USS Enterprise and kiss your hand Ltd. Uhura. Once again I´m broadcasting from my soundproof sauna in my cellar, neither the NSA nor the MI6 can hear me, my wisdom goes exclusively to you, my dearest listeners. You feel there is something different today? Maybe the new microphone for € 900, with an attached iPhone of my wife? No? Maybe my new hairdo? No, none of that all. Oh, you mean the fact that I am addressing you in the language of Shakespeare, Chaucer, Sir Francis Drake, James Bond, Mr. Bean, Benny Hill and Monty Python? This is a long story and a quite embarrassing one. But as evidently you are bored and are clicking on obsure links or are taking picture of odd QR codes, I will tell you anyways. I am bored as well.

My numerous friends often tell me how smart I am, how handsome, how erudite and above all how multilingual. I have entertained and enlightened my listeners in Viennese, Griass eich de Madln und Seavas de Buam, every now and then in German, und Tschüss, Italian, Ciao Zio, Latin, Ave Caesa,r Russian, Druschba Tovarisch Vladimir Vladimirowitsch, North Corean, Grüss Gott Herr Bundespräsident Fischer.

But never ever in English. So these friends are asking me with urge to finally enlighten the billions of Anglo Saxons out in deserts on both sides of the ocean. I am always grateful for suggestions, so I asked myself why indeed I never had. It took me but a moment to come up with a number of alltogether plausible answers why I never had. First of all, my beloved late grandpa had revealed to me on his deathbed that anything that could not be said in Viennese was a lie anyways. Second of all, English sucks, it really sucks and there is scientific proof thereof.

Thirdly, why should I enlighten them, throw my pearls before the swines. You may object that I have lied to you on so many occassions in so many languages, so one more or less would not make a difference.

Well so let it be then, let me throw my pearls before you, you swines.

Indeed I am conversing in English every now and then for a number of reasons, sometimes to save the world.

Recently on a highly political, highly intellectual forum on Google+, only proles post on Facebook, I discussed very serious issues, ranging from who should be the next president of the European Commission and why not, to mud wrestling and topless golf.

I tried to give a plausible explanation based on an anecdote of my own, long, moderately interesting, eventful, instructive and at times hilarious life which nevertheless does not appear to interest a pig on Wikipedia. While they have repeatedly erased my biography for lack of public interest, each and every single Pokemon figure has its curriculum vitae posted there. But that is another issue. I am diverting from the subject at hand.

I explained to this distinguished English gentleman:

To generate a minimum of interest in a "sport" in which idle men, in dandyish outfits hang around for days on a meadow and rarely but every now and then try to hit ridiculously small balls with alltogether inadequate tools, they could of course introduce a female league, preferably performing topless, more preferably in inflatable pools filled with mud.

However, one thing I'm missing on the Eurosports channel, is the finals in Bingo, why not from Blackpool. I simply adored these ladies with their pink hair and the teeth in their gin glasses.

I already created a facebook page for my favourite sport

Understand five day cricket and you understand a lot about a certain English attitude. Not flashy like downhill skiers.

So I was compelled to explain to him:

There are quite a few alpine predilections which cause very little comprehension in barbarians drinking lukewarm beer or ale rather than the lukewarm blood of their foes, as we do. Let's strike a deal: You don't try to convince me of cricket, and I leave you alone with singing bearded ladies.

But to be honest – for a change - I never played cricket but a lot of - I think it was called rounders or something like that - in Yorkshire in a YMCA holiday camp for kids from difficult backgrounds. Yes, I have an empathic side to my personality, empathy even for English, or is it just pity?. I was 17 and was one of the wards doing the knife body searches in the morning on the boys.

I did indeed get the point of this kind of game, its a perfect game, if you want to have kids of various ages, sex and physical skills play together without hurting themselves or each other or getting too competitive on the body to body level. The competitiveness is exclusively between the teams not the players.

I had great fun with the young kids and I learned English, from them, if Yorkshire qualifies, and I now do understand what this means:

Hurry did not mean to speed up, but was meant to be my noble name which I share with Prince Charles second son and for the rest... Well I did not understand right away. It was only years later that I fully appreciated and fathomed the poetic depth of "bugger" as used by a blond pig-tailed lovely nine year old girl. I remember her name after all these years, it was Ruth, short for Ruthless.

So I understood that not all Anglo Saxon tribes practice understatement, elegance and subtle verbal humor like James Bond and/or Emma Peele.

Like in any good literary anectode there is an epilogue to this story:

I must have developed an exceedingly strange accent in the course of this experience. Yorkshire with a Southern German accent sounds Irish. I remember going to the Yorkshire railway museum with the kids. It was the late seventies, deep in what they called the Troubles. Again a British understatement. I wonder what they would call a desaster. What I would call a desaster is Britain joining the EU.

You are telling me they are already in?

God, all mighty, what the fuck! Holy Shit!!

And this was an Austrian understatement.

Anyhow, the armed Royalist security officer insurgent militia mercenery at the entrance asked me to open my rucksack. I did not understand right away and asked and hesitated a moment and asked and a moment and the next moment I found myself on the floor with his knee in my back. Only the dog at my throat felt reassuring, it was an acquainted race, a German shepherd. Fortunately enough, the kids told the guy I was not an IRA freedom fighter terrorist but just a harmless Nazi spy before the homely monster could close its teeth on my throat.

After you have heard what an Austrian had to tell you, you might want to abondon your plans to visit our prosperous and proud nation and/or study our language. You come to the conclusion that you would not miss anything anyhow. You are right and nor would we - miss anything.

If, on the contrary, you were charmed by our warmth of heart, our sense of understatement, subtle verbal humor and you come anyway, there is one rule to always bear in mind, at all times.

Never order kangoroo steak or koala stew in Austria. You´ll only get high colesterol, poor quality imported meat from the other, the dark side of the planet. Don´t forget, Austria is not Australia.

If, on the contrary, you decide to go to Alaska or Canada don´t forget what Frank Zappa has got to tell you